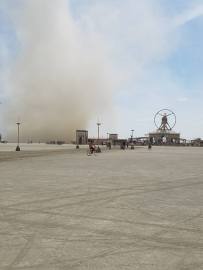 I started traveling around and going to music festivals after my freshman year of college. I spent a couple weeks every summer working  for  a patron transport service and driving around music festivals in a decked out 6 seater golf car shuttling festival kids to and from campsites and music stages. It was cash in hand, fun, and I never left a festival. In between I’d road trip around and the States and enjoyed my fair share of music and national park hopping over my college years. The travel bug bit me even harder when I graduated from University and decided to move overseas over 4 years ago. One of my best friends sent me an email 4 years before, after her first Burning Man experience; she was over the moon, it had changed her life, and she was absolutely set on the fact that we had to experience it someday together. I’d always heard about Burning Man, but the commitment was strenuous, the planning was stressful, it wasn’t cheap, and since it was always at the end of the summer, I never had the money to make it. After I came back 2 years ago for my first knee surgery, I decided that I’d spent enough of my years at regular music festivals, and decided it would be a great opportunity to join Mallory and make “the Burn” happen.

I made it to Reno, the closest big city outside Burning Man’s Black Rock City Desert in NW Nevada on Monday this week after a 8 hour exodus and the 3.5 hour push to Reno itself. I had spent my 3rd year in a row and survived Burning Man for another year. That’s what it is, it’s surviving. It’s a constant surrender to the uncomfortable. Nothing lives in this inhospitable and uninhabitable desert and it isn’t supposed to. We aren’t either. I’d spent 2 weeks there each year before and 8 days this year. Burners will tell you how healing and magical “the playa” is. Each year about 65,000 people flock to form a temporary city with a fully equipped hospital, tons of art, DJ sets, and spend the week biking around, attending workshops, looking at art, watching it burn, all while completely covered in dust that finds its way into everything. And they love it! We love it! It is a beautiful place with magical sunrises and sunsets, amazing people, interactive light up art, and it’s own culture. Burning Man is unlike any other festival I have ever attended. The entire concept is built around a gifting society, which means no money is accepted. The only things you can purchase on the playa are ice (because it’s a desert) and coffee because, well, it’s coffee. This means everything needs to be carried in and carried out. No exceptions. You cannot ash on the playa nor can you poor water onto it. Once you are in, you’re there, and the only cars allowed to move after arriving are art cars or “mutant vehicles” which resemble giant octopus, boeing 747’s and flame throwing ships that drive around the desert playing great music and throwing surprise dance parties in the middle of dust storms at 5 am.

Burning man has 10 other principles other than gifting which include things like radical self reliance, participation and community responsibility. It is a great place to explore all different kinds of workshops and try new things, they even have a skydiving camp where I would love to check out the view next year once I have my 100 jumps in. Every year a temple is built where people put letters to loved ones they have lost, momentos, items that remind them of great memories and on Sunday night it is burnt down while 65,000 people watch in absolute meditative silence. It is emotional and the love that goes into decorating its walls is heart wrenching and tear jerking whether or not you leave anything inside. The whole Burning Man concept centers around the burning of “the man” on Saturday night which is a completely different scene than the temple burn. People dance and art cars play music, fireworks go off and the man lifts his arms in a massive display before he eventually falls to the cheers of thousands of people. The concept of “sticking it to the man” started with a small group of friends in San Francisco in the early 80’s that built a wooden man and burned it down on a beach as a type of symbolism towards the rejection of modern society. After a few years the gatherings got a little bigger then local authorities would like and they were encouraged to find a new location. Since then Burning Man has found it’s home in the Native American owned land of NW Nevada.

The last 3 years have all been completely different burns for me. The first year I tragically fell out of our art car which was shaped like a fish and retore my ACL 4 months after my original surgery. Needless to say I was grounded at camp for a few days with a bum knee and spent a lot more time in my immediate vicinity. Last year I was able to get out at night and enjoy the art during the evening. I spent hours biking around the playa and experienced more of a night burn, typically sticking close to camp to help out during the day. This year our camp downsized from 50 to 18 and we were all able to benefit from a smaller camp size with less obligations. It was absolutely amazing to have the time for exploration and new experiences. Every year is different and always turns out to be exactly what I needed it to be. It took me months to process my first year and I know many people who get really discouraged and depressed after they rejoin the “default world” post Burn. I am happy and blessed to be writing this from Lake Tahoe as I decompress and process exactly what I gained from this year’s Burning Man. It truly is unlike anything else I’ve ever done. I love the planning, the challenge, the extreme highs and lows, and the growth that comes along with it. I’ve met amazing Burner family and am so in awe of the time and effort people put into these art installations year after year, just to build it and burn it down. It makes you realize the impermanence in everything, and helps you appreciate each day and the people and places in front of you. It transforms everything into such a simplistic worldview. If you’ve ever considered Burning Man, I can’t promise you it’ll be easy, but as cliche as it sounds, I can promise you that it’ll be worth it. Whether you do it once or keep going back year after year, it can offer everyone something.