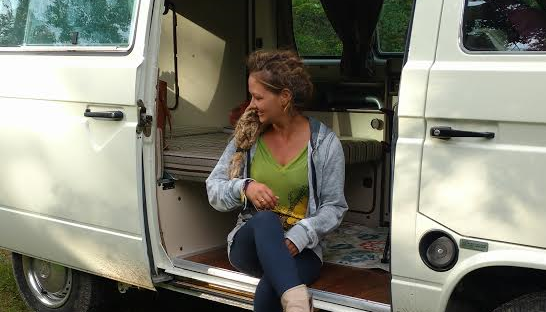 I’ve been wanting an old VW van for years now. Two summers ago I started looking online a bit more seriously but of course it was still just out of curiosity. I had been entertaining the idea of having one so that when I came back to the US to visit I would have something to live in and travel in. Flash forward to March and I get a message saying that my dad and a buddy of his had purchased a mint condition ’83 Westy from Colorado. My dad’s friend Peter mostly wanted it for tailgating U of M football games seasonally and my dad just thought it was a fun thing to have. I almost lost my mind when I got the photos and saw the new purchase! Since I now had free reign to use it as long as Peter wasn’t needing it I decided that I would drive her around when I came back towards the end of the summer.

I found out about 2 months before I got back stateside that it was a manual. Something my father failed to mention in the beginning, surely on purpose because there is no way he could forget that I still couldn’t drive one because he tried to teach me when I was 15. He came home from work one day and said, “meet me in the car in 10 minutes”. When I opened the driver’s side door he was sitting in the passenger seat with a full face snowmobile helmet on. Haha, really funny Dad! I probably stalled it about 5 times just leaving the driveway and about 8 miles down the road stalled it out on a left hand turn, got stuck in the middle of the road, panicked when the cars lined up, and bailed into the backseat in a fit of tears and stubborn teenage hormones. Dad had to get out of the car, walk around to the drivers seat, the whole while wearing that ridiculous helmet and waving at the traffic apologetically. I refused to ever try again because it was “too hard” and I “wanted an automatic”. Today I would kill for that Subaru Outback, but 15 year old me thought differently.

So what’s a girl to do when she gets her dream van at the age of 28 but it happens to be a manual? Well put her pride away, laugh, and get behind the wheel obviously! Then naturally a week later take it across the country to Burning Man in Nevada! Nothing forces you to learn quickly like a cross country roadtrip! So I’m back in the States, finally stumbled across some BM tickets, and now have 3 days until I embark. My boyfriend taught me how to drive a 6 speed jeep deep in the jungle of Mexico, so I was a little bit familiar and knew the basics already. But nothing had prepared me for this old lady! She’s a finicky 4 speed with gears that can be very tricky to drive, let alone find! As my father told me, “if you can drive this thing, you can drive anything”. I have spent the last few days practicing on hills, taking mom to lunch, driving to friend’s houses, and just generally driving around trying to get comfortable. I’ve learned that I tend to drop the clutch much too fast, which has gotten some laughs and cheers when pulling out of busy gas stations with 2 hops and a peel out before we start rolling. I’ve been laughing uncontrollably when I have to wave people around me because I can’t find first gear and it’s still revving itself in neutral. Oops!

I spent yesterday driving around with a girlfriend who knows how to drive a stick and learned living in a busy city. It was raining out and we spent the whole day doing laps through town and parking in my parents or my brother’s driveways. We would just hang out in the van, laugh, and talk about all the things we could do to it. I’ve got a solid list going to get her Burning Man ready and it all hit me yesterday how absolutely amazing and in love with the van I am. I’m still trying to come up with a name for her but we are convinced it’ll come when ready! I’m doing the drive out by myself and since I don’t want to drive at night, and am trying to avoid the majority of mountains (although I will have to cross the Rockies at some point, regardless) I’m feeling comfortable with my planning and giving myself ample time to get to Reno where I’ll pick up my buddy from the airport. I have friends along the way to stay with and can pull over and sleep in the bed anytime I need to. It’s beginning to feel like home and I haven’t stopped smiling for the last 2 days!

Today we take the first big haul 45 minutes out of town to Brainerd, MN to stock up at Fleet Farm and Home Depot. The girls have been helping me come up with a list of “van necessities” along with totes to get organized. So we are going shopping and I’m sure we’ll have a lot of laughs along the way in stop and go traffic as I maneuver the van around town less than flawlessly. Wish me luck!

Since I’ve been back in the States I stopped in San Diego for 5 days to visit my sister then flew back into Minneapolis where my parents picked me up and we spent 5 days in northern Wisconsin at the cabin on Lake Superior. It was such a nice way to unwind. Now I’ve been back in my hometown for the past 10 days catching up with family and friends and now packing for Burning Man. It’s gonna be an adventure, I’ll tell you that much! Don’t forget to follow me on instagram @theramblingmermaid and snapchat at smilelotsplz. I will keep you up to date on all the funny things that are going on, as well as my progress on the van! Much love.

6 thoughts on “converting to the #vanlife”